skip to main | skip to sidebar

A new flash piece has just been published at Bizarro Central.  This was an odd one in that I wrote the first draft of this some 20+ years ago, when I was going through my Baudelairean Poemes en Prose phase (I managed to avoid going through a Lovecraftian phase, unlike many authors.  But as I say, I did go through a six month period before I really found my voice where I was turning out little Baudelairean sketches which, while the ideas behind them were very much my own, the approach was very cynical and weary a la Baudelaire, and the prose was almost a pastiche of the great flaneur).  I liked the idea but I could never really think of what to do with it until this summer, when I was trying to write a lot of new flash fiction to get the 'ol writing muscles warmed up for a bigger story I wanted to write.

I was quite happy with the way it turned out especially as I was really happy with the voice on this one; distinctly my voice (all elements of Baudelaire gone!) and the actual ending was improved, too.

Anyway, you can find the story over at Bizarro Central.

"Burr is not merely a "new" voice, he is a fresh voice – a different and disturbing voice - and one deserving of your attention."

State of the Nation 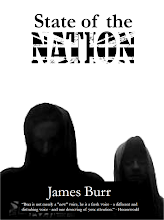 "Burr's stories are hard to categorize, as they're not strictly horror or fantasy per se. However, all are imbued with a dark flood of macabre images that continue to disturb and haunt long after reading. The stories carry a core psychological reality (even the more surreal), layered with pathos and fatalism wrapped in punkish sensibilities. Each narrative in Ugly Stories feels like a complete and nuanced world inhabited by isolated souls walking a dark, lonely road.As difficult and uncomfortable as it is to see ourselves sometimes in the darker aspects and recesses of art and literature, we are somehow compelled to stare into that abyss. Burr's collection just happens to make it all worth the pain."

Read this review in full at THE HARROW.Garvan Giltinan, The Harrow


"This is a collection of short stories that steadfastly refuses to be shoehorned into any genre niche, though those who enjoy horror will assuredly find much of what they like within its pages. If you pinned me down and asked for a writer James Burr is similar to, my answer would be Russell Hoban, though even that may be stretching a point, with perhaps a hint of the early Vonnegut. These stories are not ugly, though they often touch on aspects of life that are, and you don't need to have model girl/boy looks to read them, just an open mind and a willingness to embrace a young writer whose work is that little bit off the wall, but refreshingly so."Peter Tennant, Peter Tennant's Case Notes, BLACK STATIC.

Read the full review at the TTA Press website.

Burr is not merely a "new" voice, he is a fresh voice – a different and disturbing voice - and one deserving of your attention. His work is not easily categorized, which may, or may not, be a good thing. There are certainly horrific elements to Mr. Burr's fiction, but also what can be more readily described as "dark fantasy" and even, perhaps "Bizarro" fiction. .....There is also a dry, sardonic, and often satirical humor running through much of the stories in the book. The stories in this collection worked, for me, because they were not merely "different," but because they truly were disturbing to me, as a reader, and many of the stories stayed with me long after I'd finished reading it. Be forewarned - these stories ....... require, perhaps, a bit more effort on the part of a reader; but those looking for something a bit different and challenging, will be handsomely rewarded. This book is highly recommended.

Read this review in full at HorrorworldNorm Rubenstein, HORRORWORLD

"Ugly Stories for Beautiful People feels like a book in its own little world. I don't mean to suggest that its stories never joined the party – a glance at the list of previous publication credits will reveal that they did – but there is a certain sense that this book stands to one side, that it's doing its own thing, as it were. The collection begins and ends with a story called BobandJane and its postscript, about a couple who are so very much in love (Burr's prose conveys this superbly) that, yes, they don't perceive reality as it is – and, at the very end, their bubble may just be starting to burst. Not just a neat story, it serves as a summation of the whole book, a book which covers a range of human emotion, precarious relationships and equally precarious realities (and there may not be much difference between the two); and whose intriguing constituent parts form a complete, intriguing entity."

"This reviewer has read countless collections of fiction, in many genres, many eras. That being said, Ugly Stories has got to be one of the oddest. That could be a negative, yet in this case, Burr's strong imagination and plaintive, yet very effective prose manages to pull it off. Odd, unique, very cool, and extremely readable, this collection is recommended for anyone looking for something different - or for one of us who isn't one of the beautiful people!"

Read this review in full at Hellnotes.David Simms, HELLNOTES


"It's always a pleasure to find an anthology that's well written and unique and that strikes a chord long after turning the final page. Ugly Stories For Beautiful People is just such a collection.These loosely linked stories begin with Bob and Jane, A Fable in Two Distinct Parts, about a couple whose adoration for each other is all-consuming. Foetal Attraction is deftly narrated by a pregnancy kit that wants nothing more than to deliver the happy news of impending motherhood to its rather unsavory owner. In The Dada Relationship Police, a man discovers that a shadowy group seems to know every aspect of his life and his relationships. In The Byronic Man, a man must decide how far he'll go to make himself attractive to the opposite sex. Burr takes a satirical look at what could happen when humans' proclivity for pretentiousness suddenly runs amok in It. And in the "postscript" story, Bob and Jane make a final disconcerting discovery…From the darkly twisted, to humorous to stories filled with illuminating social commentary, Burr's innovative speculative fiction is an insightful, and sometimes disturbing exploration of the human psyche. Read Ugly Stories For Beautiful People in its entirety for its full effect -- James Burr's work exemplifies what a well crafted short story is all about."
Rating -- 3 out of 3 books

"Burr brings to life an almost zoological variety of characters, a sweeping menagerie of insipid drug dens, high art soirees, faltering romances, madness, and the ever-present reggae. Burr convincingly weaves together the various societal strata of London and Barcelona from beggar to bureaucrat, acid-head to activist, and brings them to life to co-exist side by side in the same heartbroken, disillusioned universe.Ultimately, Burr's view alternates between the sentimental bitterness of failed romance and a sweeping image of modern life in all its sickness and beauty. Burr's writing, like his characters and his world, fluctuates from the simple to the complex, from the vulgar to the sublime. It is as if Burr cannot decide whether he wants to indict society or glamorize it.And because that's the point, Ugly Stories for Beautiful People is worth a read."


"And when the pages finish sucking you in so you can raise a stained face, you'll be grateful such beautiful stories exist for such ugly people, the poor saps."

These stories offer a wry sideways look at modern life and culture, twisting and turning the quirks of everyday life into something recognisable and yet entirely odd - like a caricature, perhaps. There are common themes: is what we call reality really real? How can our own minds fool us? Can simple statements and thoughts help use see the true reality from within our mindless everyday haze? There is also an obsession with relationships - and specifically what happens when they come to an end.....Ugly Stories for Beautiful People is a good collection of entertaining speculative fiction, which I would recommend without reservation. "


The most interesting thing about James Burr's stories, in my mind, is the use he makes of urban fantasy. In Burr's stories, the mundane creates the fantastical. When a real-life issue is loaded enough, when the mundane pressure grows and grows, then reality will twist and expand, and the impossible will occur. What Burr really pulls off well, then, is resonance. His stories are powerful because they are about pain, conflict, and emotions, and he tries to pick the ones that will be so powerful the reader will believe they are strong enough to warp reality. The impossible happens because the characters desperately want it to—and so Burr grants their wish. The bleak, depressing nature of these stories shows us full well how much confidence Burr places in humanity's desperate desires."


"Burr's short stories defy categorization. The stories vary in length and range in type from a tale told from the point of view of a pregnancy stick to the story of two people who are so in love with each other that they literally become one. The format of the book is also unusual. It has no table of contents, and the stories just sort of flow into each other. If there is a theme to the collection, it is about how the characters' perceptions prevent them from seeing the reality around them. Burr is a talented storyteller with an impressive imagination. His stories will be appreciated by readers of horror, bizarro fiction, and those who just like good writing. Recommended."

"The majority of the book is brilliantly written, with the basis for many of the stories involving relationships between wives/husbands, boyfriends/girlfriends, people/drugs, that range from the perverse (BOBANDJANE) to the bittersweet (Ménage Á Beaucoup). My personal favourite is probably ‘Life Is What You Make It’, involving as it does a woman dealing with grief in such a bizarre way that she’s fundamentally altered the structure of reality. [...] It might not be too bold to say the world needs more writers with fresh and weird ideas, and James Burr falls firmly into that camp."

"This collection could just as easily have been called Ugly Stories For Unsettling Contented People, for to enter the world of James Burr is to step into a region where reality is fluid and to be happy, or at least settled, is to be in incomplete possession of the facts. Once you enter, reality fractures in surprising and innocuous places. It was the shortest tales which for me had the greatest impact -- the delusions and, ultimately, kindness revealed in Mutton Pie; the pace and linguistic inventiveness of The Byronic Man; and best of all from this collection, It, which is a gem of a story, at once hilarious and horrific, a story which leaves you envying the author its premise while admiring the perfect balance with which that premise is developed. The best test of such a collection is the success with which the author inveigles you into their world. In this case, I finished the book in the food court of a shopping mall, put it down, looked around me, and waited for the cracks to show. "